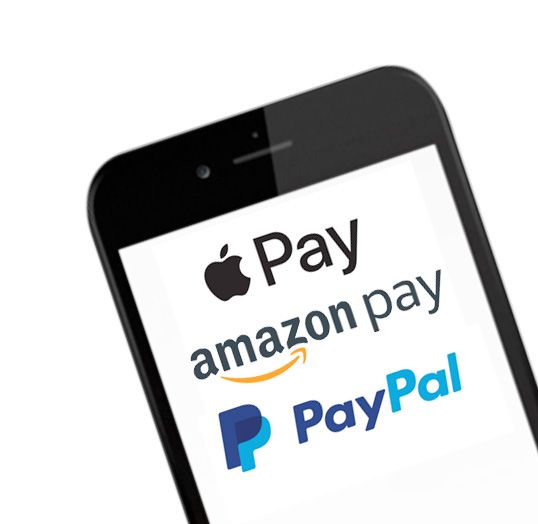 In the early days of civilization, we paid for things with the barter system.  Then there was cash and credit cards.  Now payments are transitioning more into the web enabled world – through services like PayPal, Apple, Amazon and more.

All three platforms including PayPal, Apple Pay and Amazon Pay were developed as a trusted e-commerce web based platform and also have a trusted consumer base.  There are some minor differences between PayPal, Apple and Amazon but all are safe and effective in making alternative payments

PayPal is by far the most popular alternative form of payment but the major difference between PayPal and Apple Pay and Amazon Pay is that PayPal was specifically designed to make payments for businesses while Amazon and Apple are banking off of stored credit and debit card information from previous Apple / Amazon purchases.  Another major difference is PayPal operates like a bank and allows you to maintain a positive balance and when you’re ready, you can transfer the balance to your bank whereas with Apple and Amazon, when you make a payment, they charge your card.

Apple Pay is the second most popular alternative pay system since it is based off an iOS device which includes some 500 million users.  Apple Pay allows you to pay for goods and services through your Apple Account and can be as simple as using your Touch ID on your phone to pay.  Apple Pay also has a built in technology called NFC that allows users to wave their phone over a sensor to pay making buying things quick and easy.

Similar to Apple Pay, Amazon Pay uses your existing Amazon account and stored credit card and debit information to make payment.  Amazon Pay uses a QR code on your phone which is swiped over a sensor.  Since Amazon Pay does not require a specific phone or tablet, it is able to be used by more people